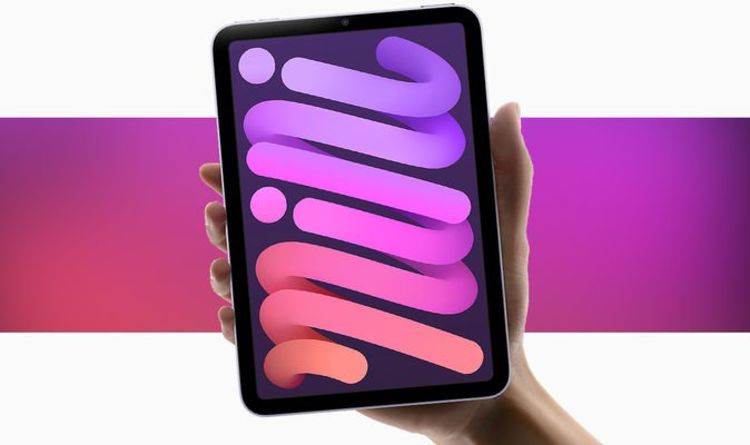 Of course, that bigger screen means there’s nowhere to put the fingerprint scanner so Apple has now placed this on the top as part of the power button.

Along with that screen and new way to unlock it, there’s also more power under the hood thanks to a faster A15 Bionic processor. In fact, Apple is boasting that the iPad mini now features a 40 percent faster CPU and 80 percent faster GPU which should mean this device handles your emails, games and more with ease.

Another nice extra is better Landscape stereo speakers which will make the nightly Netflix binge sound far better than before and it’s fully compatible with the latest Apple Pencil which is not only more accurate but also snaps to the side of the aluminium case for an instant refill when the battery gets low.

Users will also be treated to the latest 5G data speeds, a fast charger and access to Wi-Fi 6 for even quicker downloads.

If you love snapping pics on your tablet then there’s more good news with Apple upgrading the rear snapper and adding a True Tone flash for better shots at night. This main camera is updated to a 12MP sensor with Focus Pixels and a larger aperture to capture sharp, vivid photos.

The front-facing camera also gets Apple’s new Center Stage technology which helps to keep users in the shot as they move around in the frame. This clever upgrade was introduced on the premium iPad Pro earlier this year and is now making its way onto Apple’s more mainstream tablets.

Something else that photographers will like is the new USB-C connector on the base of the tablet. Yes, Apple has ditched the Lightning Port and switched to USB instead which makes it easier to connect other devices such as external DSLR cameras to the tablet.

Despite all of these features and better screen, Apple is promising the same 10-hour battery life iPad user have become used to which is mainly thanks to the A15 being much more efficient.

“With its ultra-portable design and wide range of uses from everyday tasks to creative and enterprise applications, there’s nothing else like iPad mini,” said Greg Joswiak, Apple’s senior vice president of Worldwide Marketing. “With a new all-screen Liquid Retina display, massive boost in performance, new advanced cameras on the front and back, Center Stage, USB-C, 5G, and support for Apple Pencil, the new iPad mini is a huge leap forward that can be held in the palm of your hand.”

Wi-Fi models of iPad mini are available with a starting price of £479 and Wi-Fi + Cellular models start at £619.